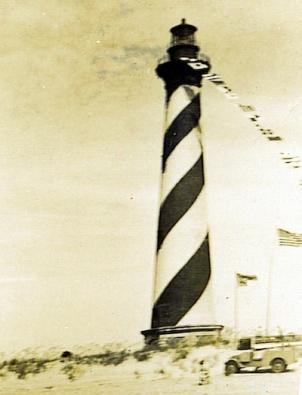 Standing as the arching gateway to the Atlantic Ocean, Hatteras Island is a long, majestic strand that runs along the coast in the Outer Banks of North Carolina. It was previously known as Croatoan Island due to its previous inhabitants: the Croatoan settlers and the Roanoke tribe. With 42 miles of narrow land, this bow-shaped island acts as an outer boundary for the Pamlico Sound.

The first settlers, the Croatoan, were a group of British colonists who were dubbed the “lost colony.” The settlers were led by Phillip Amadas and Arthur Barlowe, two men who were well regarded for their discoveries. Their arrival was predicated by Queen Elizabeth I’s desire to establish an English settlement in the eastern United States. Little is known about what happened to the colonists, as the entire colony disappeared during the Anglo-Spanish War between 1587 and 1590. A resupply mission was attempted a few years after their initial settlement, but there wasn’t a trace of any man, woman or child when the supplies arrived, hence the name “the lost colony” was established.

In 1938 at the young ages of 17 and 13, two brothers, Anderson and Stockton Midgett, began the Manteo—Hatteras Bus Line with their brother Harold. This bus line transported visitors, delivered mail, and daily newspapers everyday, rain or shine. Anything that the people needed to be delivered up and down the island relied on the Manteo—Hatteras Bus Line to get the job done. This bus line drove on the sandy beaches in the days before roads and bridges were built, often times getting stuck and needing an extra push.

These two Midgett brothers were also a part of establishing the Cape Hatteras National Seashore, which was established on January 12, 1953. The Cape Hatteras National Seashore was America’s first national seashore park, and is now one of the top destinations for family vacations across the United States. All along the coast of the Outer Banks, the ocean floor has become home to more shipwrecks than any other place in the country, hence the nickname, “Graveyard of the Atlantic.”

While the island itself is very small, Hatteras Island became a popular tourist destination over the years, mainly due to its vibrant beauty and world-class Marlin fishing. To this day, Hatteras is referred to as the blue marlin capital of the world. Hatteras has attracted more than sightseers and fishing enthusiasts, however. The island has become a magnet for sport fishers, kite boarders and windsurfers of all ages.

With a population of just over 4,000, Hatteras Island stands as a quiet and relaxing tourist destination. Suspended in endless water, this paradise of the Atlantic Ocean welcomes tourists annually from all parts of the world. If you’d like to experience the grandiose beauty of Hatteras, we welcome you to come join us on Hatteras Island.